We arrived safely to our new friend's house in Moricetown.  We've been guests of people from the Wet'suwet'en First Nation and have been made really welcome by our host and his friends and family.  The Wet'suwet'en have no treaty with Canada and their territory is unceded.  Despite this, the current plans for the Enbridge pipeline and the Pacific Trails Pipeline are due to cut right through their lands.  Many people from the Wet'suwet'en are determined to stop this.  They can tell their story much better than us and you can find out more on their website.

We visited the camp they have set up on the gas pipeline route on Tuesday.  We were able to help with a little bit of the building and it was interesting to see and very inspiring to talk to some of the people fighting for their land.  There's an amazing sense determination to fight for what is yours, but with a strong global political analysis- for instance, a real concern is that projects like this are only proposed so that they will be protested and fail, allowing the companies to 'offset' what they DIDN'T do in one place, and do it in another.  In this case this might mean the Alberta-Texas Keystone XL project.  Our hosts here are not interested in protecting their lands only so somewhere else in the world can be ruined, but in a wider anti-destruction and expansionism outlook.  It's been inspiring and exciting to meet the people here.

Right where the camp is located is the proposed site for the convergence of five separate pipelines to cross the river.  I took the picture of the river standing almost on the planned site of a drill pad. 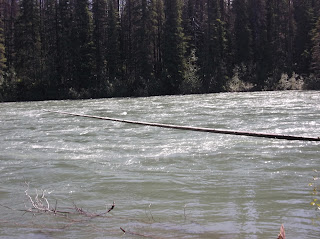 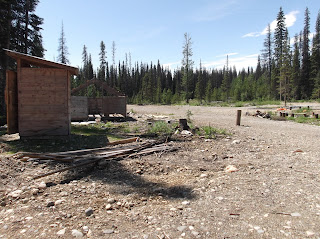 The next camp to be hosted here will be in early August, for a traditional wedding and also the coming together of people to resist the pipeline.  It will be well worth keeping track of what happens: this should be much bigger news than it is.

As well as being well looked after and fed up on delicious fish, buffalo sausages and moose ribs (all from the area) with loads of time to relax and watch some interesting documentaries and read books, we've been taken out to explore the area and learn about some local activities.  We've picked soap berries (tarter than gooseberries and go foamy when mixed with sugar to eat), been to a couple of the community lunches, watched the traditional drum group (we were also encouraged to participate.  J never knew C was taught the highland fling when young...), and been taken out to watch and help collect birch bark for many baskets and various things.  The way it's removed doesn't harm the tree and the bark grows back over time. 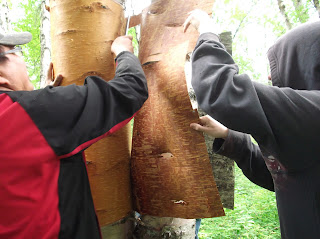 Despite bringing some rain from Scotland, we also had a good wander round. 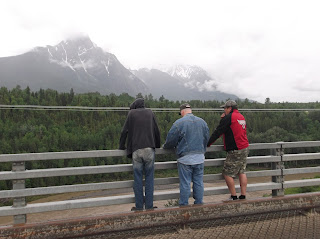 This bridge is over the most stunning canyon.  Looking down though, it's interesting to see the difference in the water, just a few pipes and logging outfits down the same river than the sparkling blue in the photo from the camp.

Tonight our host is going to Prince George so we're bumming a lift, to pick up all our stuff and say hi to the lovely people there, before hitting the road south again.